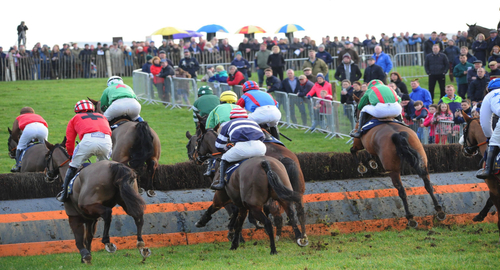 Point-to-Point racing has a long and rich history at the scenic location of Fairwood Park, Tinahely, since 1989. Fairwood Park also plays host to the Tinahely Agricultural Show each summer which is one of Ireland's longest running agricultural show.

Jamie Codd, who is the second winning-most point-to-point rider in the history of the sport became the first modern day rider to ride all six winners on the one card at Tinahely in October 2011.

Previous track winners to have won at Tinahely include former Grade One winner Fundamentalist and Cheltenham Gold Cup runner-up On His Own.

Tinahely is situated in the heart of the Wicklow countryside, the garden of Ireland. Located just an hour and half from the bustle of Dublin city, Tinahely is a pretty village in south west Wicklow that offers a variety of walking opportunities and a gateway to the beautiful Irish landscape.

From Waterford – Take the N9 until junction 5 where you need to take the N80 exit for Carlow/Rosslare.

Tinahely point-to-point is located an hour and forty minutes from Dublin airport.

Combined with our free parking, we are lucky to have a clear viewing track that allows race goers to get up close to the action, often from the comfort of their car, should they wish to bring their own picnic for the family.

There are certain parts of the track that can be used to facilitate disabled parking so as to cater for every eager race goer.

The bookmakers ring is conveniently situated in close proximity to the parade. Check out all the runners before deciding where to place your hard earned cash!

In between races, spectators can avail of a variety of catering options provided.

The venue lends itself very well to family picnics when the weather is favourable.

The onsite catering providers will provide range of hot and cold drinks.

As a result of the very strict drink driving laws a few years ago we decided to discontinue providing or selling alcohol.

However people can bring their own and some wonderful and exotic beverages can be seen taken out of the back of cars and trucks.

As warm as possible. High heels probably not advisable however it is lovely to see some people dressed up in their country tweeds.

Yes all dogs welcome once they are kept on a lead.

Of course. We just ask that no rubbish is left behind.

No, but because the children can get up close to the action we find they love watching the races.

No we do not provide an ATM so we recommend that you make a stop in Tinahely on your way to the races.

As a large number of the people attending our point-to-point are there purely for the races we try to concentrate solely on providing the best racing possible.

Over the years, after the last official race we have ran a very popular race confined to our hunting members riding their hunters.  We have not been in a position to run this for the last few years but hope to start doing so again.