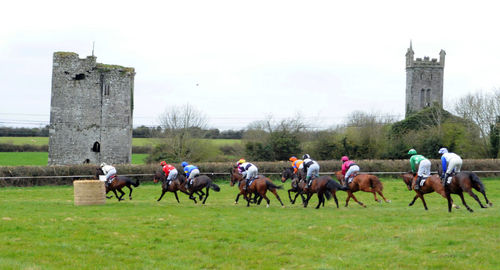 The Tipperary foxhounds are one of the oldest packs in Ireland, dating back to 1820. The pack was formed by The Bartons who reside in Grove, which is only two minutes from the point-to-point.

The Tipperary foxhounds hold two point-to-points each year on the same popular and well-appointed track in the spring and in the autumn. The track is on undulating land and can be used both right and left handed, with an extension added in 2020.

Entries traditionally are large at the popular track, giving a great day of sport with divided races. Many winners at the track have gone on to make great names for themselves including Cheltenham foxhunter winners On The Fringe and Salsify.

Eircode: E91 DR62 (The track will be signposted from this point)

From Clonmel - Take the R689 north until you see signs for the track.

Our point-to-point is located an hour and a half from Cork airport and two hours from Dublin airport.

E91 DR62 (The track will be signposted from this point)

“Lisronagh point-to-point has been run both left and right handed”.

We have free parking for spectators and sections that can be used to facilitate disabled parking with clear views of the track.

Our outside food caterers are located beside the parade ring and bookies and they sell an array of hot food options such as burgers, chips, sausages and chicken goujons.

Also if you would like a treat during your days racing we have a sweet stall in attendance.

No, we do not have an official dress code however we advise our racegoers to dress up for the weather so that the day can be enjoyed to the full. In the autumn it may be windy and wet under foot, conversely it could be a lovely sunny crispy day. In the spring the weather can be variable also.

The dog show and terrier racing are some of the entertainments which are provided for the kids and everyone is very welcome to bring their own dogs, including terriers for the racing.

No we do not provide an ATM so we recommend that you make a stop in the nearby town of Clonmel which is only three miles from the point-to-point.

Both of our meetings are held on bank holidays which is a great day out for all the family over the holiday weekend.

We have an abundance of attractions for everyone including a dog show, terrier racing and a side saddle race.

Our parking offers great viewing of the track in this picturesque area of Co.Tipperary which is surrounded by Slieve na Mon and The Comeragh Mountains.

Two of the fences as well as the finish are located beside the best viewing areas so race goers can get up close to the action.

Also as an added bonus for parents all children U16 have free admission.