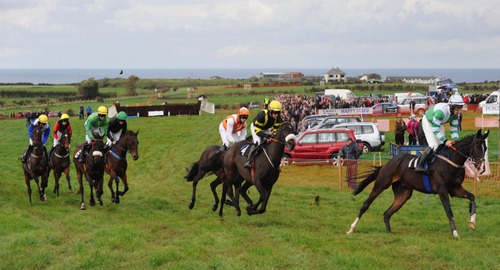 The Route hunt have held point-to-point meetings at a number of venues since the 1930’s, before returning to their traditional picturesque venue of Portrush in 2016.

Previous track winners to have won at Portrush include one of the most talked about national hunt horses in training at the moment, Finian’s Oscar who won his four-year-old maiden at Portrush in October 2016 before selling for £250,000 at the Cheltenham sale the following month.

The charming Portrush is a holiday destination for many people, boosting the Famous Barry's amusements. Near the Giants Causeway, Dunluce Castle and Bushmills Distillery to name a few places of interest. The seaside town of Portrush is the ideal venue for an event of this nature as there is plenty of accommodation, so why not spend the weekend in the North of Ireland while taking in the point-to-point racing.

From Coleraine - on the A29 Ring Road towards Portrush at the last roundabout on the ring road take the last exit for Portrush, 200 yards on the left is the Loguestown road. The track is located approx. 1.5 miles on the Loguestown Road at the junction of the Roselick Road.
The postcode is BT56 8PD.

Portrush point-to-point is located an hour from Belfast International airport and 45 minutes form the city of Derry airport.

“Racing re-commenced at Portrush point-to-point track in October 2016, at the same venue which they had used 40-years ago”.

Our car parking area is situated beside to the track which offers race goers the chance to get close to the action without having to leave their car. This also provides an ideal spot to enjoy a picnic while you enjoy the racing. Picnic benches can also be found around the parade ring and catering areas.

Disabled facilities are provided at the track which gives spectators a perfect viewing point of the action.

Our outside food caterers are located beside the parade ring and bookies which means you don’t have to venture too far from the action to purchase some snacks. You can choose from an array of hot food options such as burgers and chips to sausages and chicken goujons.

Our hard working committee members also supply a delicious selection of homemade cakes, buns and sandwiches which are for sale in the food tent beside the parade ring.

If you would like something a little stronger to keep you warm during your days racing, alcohol can be purchased in our on-course bar.

Yes, we welcome visitors to bring their own picnics or refreshments. We also have a range of catering options on course if you don't fancy packing a picnic for the day.

Portrush point-to-point is the perfect day out for the family in Northern Ireland countryside and as an added bonus for parents all children U16 have free admission.

Our point-to-point is located only a few miles from many famous landmarks which include the Giants Causeway, Dunluce castle, Bushmills distillery and Barry’s amusement park which is the largest of its kind in Northern Ireland.