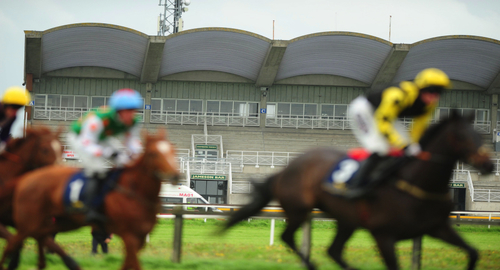 Home to the Irish National each Easter Monday, the Grade 1 course at Fairyhouse also played host to the Fingal and Ward Union point-to-points for a number of decades.

However for close to 10 years, from the last Ward Union fixture at the venue in 1995, the track remained absent from the pointing fixture list until it was re-introduced by the Louths in 2014 to host the second ever Anglo-Irish Challenge and E5,000 Tattersalls Ireland Mares Winners race.

Since then it has been the home of the Meath & Taras spring fixture. Taking place inside the inner rules course, the point-to-point track is just over one-mile around with five fences, and is considerably sharper than the main course, and speedier horses tend to have the edge.

Combined with our free parking, we are lucky to have a clear viewing track that allows race goers to get up close to the action, often from the comfort of their car, should they wish to bring their own picnic for the family.

There are certain parts of the track that can be used to facilitate disabled parking so as to cater for every eager race goer.

We have a number of portaloo’s situated around the course which also includes baby and toddler changing facilities.

We are fortunate to have a hard-working committee who volunteer a lot of their time in the lead up to the point-to-point with many members providing delicious homemade soups, sandwiches, cakes and buns in the catering marquee that is located close to the parade ring and the action.

If you are still feeling peckish during your days racing we also have some fast food units that serve burgers, baps and tasty chips to keep you full for the day.

Our dedicated volunteers in the catering marquee are on hand all day to serve you hot teas, coffees and soup along with soft drinks and juices for the younger race goers.

Soft drinks may also be purchased from our outside catering unit. If you would like something a little stronger we will also be serving hot toddy’s, the perfect warmer upper, with additional alcohol options also available to purchase from the catering marquee.

No, we do not have an official dress code, we just advise our race goers to wear comfortable footwear and wrap up warm.

Yes, we allow dogs to attend the point-to-point, but would ask that they are kept on their leads at all times whilst at the track.

Yes, however if you can also avail of our on-course catering facilities.

At our point-to-point we are lucky to have wide open spaces for children to play in a safe environment.

No, we do not provide an ATM. There is an ATM machine located in the Maxol Garage which is only a short walk turning left outside the gates of Tattersalls.

Fairyhouse point-to-point is the perfect day out for the family in the countryside and as an added bonus for parents all children U16 have free admission.

Race goers have the opportunity to get a close up of the action when the runners are being saddled and paraded in the parade ring before their race. The fence in our home straight allows you to get a perfect viewing point of each race.

With Dublin city only 30 minutes from the track, there is an endless amount of attractions to keep you busy within the area.