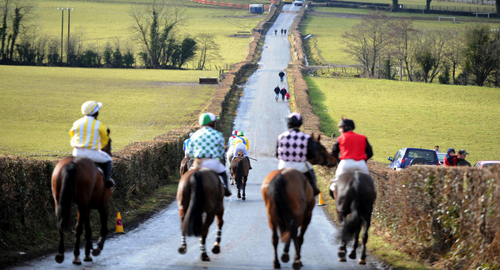 From Armagh – Our track is located in the townland of Farmacaffley which is two miles from Armagh city on the Armagh to Keady road.

Our point-to-point is located one hour from Belfast airport and an hour and a half from Dublin airport.

Combined with our free parking, we are lucky to have a clear viewing track that allows racegoers to get up close to the action with our final fence located close to the car park so you can enjoy the thrill of the action from the comfort of your car.

There are no specific facilities for the disabled but if the committee is contacted prior to the fixture arrangements can be made for special car parking.

Our outside food caterers are located beside the bookies and they sell an array of hot food options such as burgers, chips and sausages.

Our catering vendors have a choice of hot drinks on offer, from teas and coffees to hot chocolates and soft drinks to keep you warm during your days racing.

If you would like something a little stronger to keep you warm during your days racing, alcohol can be purchased in our on-course beer tent.

Is there kid?s entertainment on the day?

No we do not provide an ATM so we recommend that you make a stop in Armagh on your way to the races.

Point-to-point racing gives racegoers the opportunity to get within touching distance of the action so they can undoubtedly appreciate all the thrills and excitement first hand. It is your chance of witnessing some of the stars of the future that graduate from the point-to-point field each year.

Admission is £5 with all children U16 free. Also with every race card bought you will be entered into a free draw to win £50.

Our point-to-point is located 10 minutes away from the picturesque Gosford Park which is the perfect location for all the family. Gosford has something for everyone including a playground, walking trails through the forest and a pet’s corner.