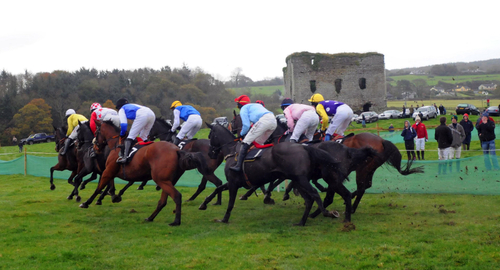 The firsts set of National Hunt Committee rules were published in 1889 and Kilkenny Hunt with its long illustrious history of holding point-to-point meets can trace its first meeting back to then. Point-to-point meetings were held under the master ship of Ikey Bell at Lacken, near Bonnettstown in 1909 and from 1914 meetings were at Bishopslough.

Thereafter meetings continued to circulate around the country, 1926 in Ballyfacey, 1927 Rahelty, 1948 Stonecarthy, 1949-1959 Wollengrange, Gowran 1960-1989. From there the point-to-point moved to Brambelstown and Kilbline and then to its current location in Grennan, Thomastown.

We hold two meetings during the season, one in November and one in May. Our tracks over the years have seen many winners go on to establish themselves amongst the elite of the racing world, dual Welsh National winner Mountainous and Tranquil Sea to name but a few.

Our point-to-point is located an hour and fifty minutes from Dublin airport.

Our free parking is located just a short distance from the track which ensures race goers that everything is extremely assessable for them for their days racing.

As the track is beside the grounds of Thomastown GAA club, we are lucky to have the use of their toilet and shower facilities during the days racing.

Our outside catering vendor has a variety of catering options from burgers and rolls to different chip combinations.

At our Spring fixture we have an ice-cream van in attendance.

Race goers can purchase teas, coffees and soft drinks from our outside catering outlet and also from our committee member’s tent.

No we do not provide an ATM so we recommend that you make a stop in the nearby town of Thomastown on your way to the races.

Set amongst the beautiful Kilkenny countryside, our well-presented race track is situated on the bank of the river Nore.

The castle which sits in the middle of the track provides the perfect viewing point for the whole family. The location of the parade ring, bookies, finish line and services give a pleasant race day experience close to the action.

Our point-to-point is located twenty five minutes away from the city of Kilkenny which has an abundance of pubs and restaurants as well as plenty of popular tourist attractions such as Kilkenny castle or the Smithwicks experience.

There is also a choice of some beautiful golf courses in the surrounding area such as Mount Juliet or Lyrath Estate.