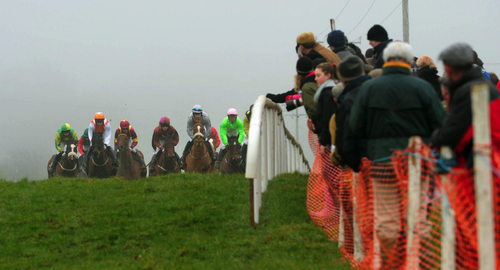 Over the years there have been many historic venues for the annual Point-to-Point races. Official races under rules were last held in Lisbunny in 1914 at what was known as the Old Racecourse.

First recorded Point-to-Point of the North Tipperary Foxhounds was in Blean, Toomevara in 1908 and afterwards at the old racecourse Lisboney adjacent to our current race meeting.  In intervening years it had been back and forth in various locations, Grange and Stereme.

In the mid 30’s they moved to Carrick Hill in Ballycommon, then to Blean in Toomevara in the early 40’s before an outbreak of foot and mouth disease forced a change of venue again to Grange in the mid 40’s. Here the races proved extremely popular with a great vantage point from Grange Hill. References to race meetings in the 1950’s in Grange included crossing ploughed fields.

In 1965 they moved from Grange back to the ‘Old Racecourse’ in Lisbunny before moving to Stereame in 1970, where they remained up until 2000. Stereame has been synonymous with racing in Nenagh for over thirty years and has seen many great horses pass the winning post including Elegant Lord, Doran’s Pride and many more. The meeting was moved to its current location in Lisboney on the Dublin road.

Our landowner in both of these locations is our current hunt Chairman Mr Peter McCutcheon whose family have been synonymous with hunting in North Tipperary since the early 1900’s.

Many great horses have won at Lisboney and have gone on to better things on the track such as English Grand National winner Silver Birch who was trained by Gordon Elliot.

Lisbunny is located on the N7 (old Dublin road) out of Nenagh with the course approximately 1 mile from the town opposite the local graveyard.

From Dublin - coming on the M7 motorway take the Exit 24 for Nenagh and the course will be on your left as you come into the town.

From North – Galway/Athlone N52
Enter into the town centre and take the R445 left(signpost Toomevara/Dublin M7) out of the town and the course will be approx 1 mile on your right.

Our point-to-point is located one hour from Shannon airport and two hours from Dublin airport.

“Nenagh point-to-point is located beside the R445”.

Our portaloos are located close to the parade ring for all to use.

Nenagh lends itself well to spectators who can view the races from the centre of the track with all fences visible.

We have a range of caterers on site which has something to suit everyone.

We a number of chip vans on site which offer a wide variety of burgers, chips etc.

Our coffee caterer also has a delicious range of delicious snacks.

We also have a dedicated coffee caterer who offers a range of hot drinks for those looking to keep warm!

No, we do not have an official dress code we as our meeting is held in January we advise our race goers to wear warm coats, caps and good footwear.

No we do not provide an ATM so we recommend that you make a stop in the nearby town of Nenagh on your way to the races.

Good viewing is assured as the course is located in the one field with a clear view of all the jumps, which allows a close up to the action for the final two jumps in the uphill finish.

The track is only minutes away from Nenagh for those looking for food or a drink afterwards.