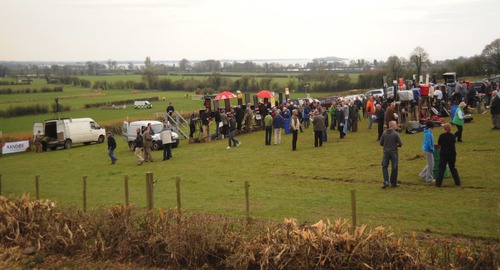 The Killultagh Hunt dates back to 1610, originally a Stag hunt, with scarlet livery. In 1832 Killultagh joined with the Old Rock harriers, whose livery was a dark bottle green. A short time later they amalgamated with the Earl of Chichester private pack, whose livery was old gold. They then became known as the Killultagh, Old Rock and Chichester Harriers. In the late 80’s the hunt changed from a harrier pack to a fox hound pack.

The Killultagh Hunt has been running Point-to-Point’s since the late 1800s, during the war the race was held near the old Enkalon site, in Antrim known as ‘The Bog Meadow’s’. In the 50’s and 60’s they located to Pigeon Town, Glenavy. Then moved to Ballyarnot, Aldergrove. Then Lennymore in Crumlin.

Our present meeting is held at the excellent location on the Largy Road, by kind permission of Dr Peter Fitzgerald and Randox Laboratories.

The new track is right handed, a slight incline from the last fence to the finish, with excellent viewing for the public as the whole course can be viewed from the main book makers/viewing area. A day out at Largy point-to-point is a perfect day in the countryside for all the family.

Our point-to-point is located less than 15 minutes from Belfast International Airport and under two hours from Dublin Airport.

Combined with extensive free parking we have a clear viewing track that allows race goers to get as close to the action as possible. This allows you to bring your picnic in the boot of your vehicle which you can enjoy with your family and friends during the day’s racing.

There are a number of portaloo’s located throughout the course.

Outside caterers provide hot food options to order in the form of burgers and chips and similar fast food options. These are located near the parade ring and bookmakers.

The venue lends itself very well to family picnics when the weather is favourable. Separate catering facilities are provided for sponsors and officials.

A Coffee Van will be on site to offer a selection of coffees and hot drinks while the fast food caterers offer soft drinks.

There is bar on site where you can either celebrate a win or alternatively wonder where it all went wrong.

Our on site catering providers also has a range of hot and cold drinks.

No, however general outdoor clothing is advised, good weather is not guaranteed!!

Yes, however please keep your dog on a lead and under control at all times.

Yes, bring your own picnic and make a day of it if you wish.

We are luckly enough to have wide open spaces where children can play in a safe environment.

No, we do not have an ATM on course.

Largy point-to-point is the perfect day out for the family in the countryside and as an added bonus for parents all children U12 have free admission.

Race goers have the opportunity to get a close up of the action when the runners are being saddled and paraded in the parade ring before their race.

With Belfast city only 30 minutes from the track, there is an endless amount of attractions to keep you busy within the area. The picturesque Lough Neagh is very close to the point-to-point.