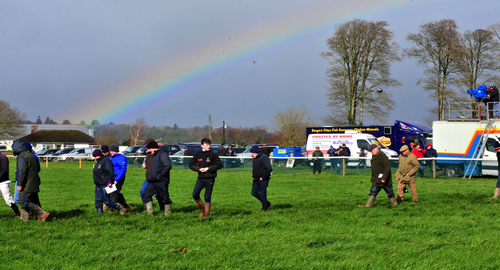 The West Waterford Hunt was formed in 1915 from the amalgamation of the Coshmore and Cois Bride hunts. The first Lismore Point to Point was held in 1912  under the Coshmore Hunt and since 1923 the event has been held in the grounds of Lismore Castle estate .

The course  lies to the west of the Castle with a backdrop of typical West Waterford country and the Knockmealdown Mountains rising in the distance.

The point to point has a large dedicated committee of volunteers who throw their full energy into making the day a success.

The ground is generally in a firm condition even after prolonged periods of rain due to the drainage through the limestone bed rock .

From Waterford
Take the N25 until it meets the N72 two miles before Dungarvan. Follow the N72 through Cappoquin to Lismore and follow signs for parking.

From Cork
You have the option of  taking the N25 to Dungarvan and then joining the N72 or taking the M8 exiting at Watergrasshill, and turning for Conna just before Rathcormack . Then  take the Conna Tallow(R626) road and thence on to Lismore.

From North Cork
Leave the M8 at Fermoy and take the N72 East to Lismore via Tallow.

By air
Cork airport is 1 hr 15 minutes from Lismore

Lismore Point-to-Point is very much an enthusiasts event. However, close to the venue are the Green Road

back
into Lismore, a well-appointed children’s playground and a number of good restaurants.

The view of the course is unobstructed from the car park and main spectator area which overlook the entire course. The car park is a popular venue for picnics when the weather is kind.

There is an on-course betting ring for those who want to have a flutter.

Light snacks and sweets are an option for those planning to eat in Lismore later.

Fast food, tea, coffee and soft drinks are available from a number of outlets on the course.

There is a choice of hot and cold drinks on offer, from teas and coffees to soft drinks served

to you from our outside catering vendors.

IS THERE A DRESS CODE FOR POINT-TO-POINTS?

There is no dress code but the usual health warning is given for March weather; prepare for the worst and hope for the best. We have had days that began with snow showers and then finished with a heat wave but generally we enjoy mild spring weather on the day.

CAN I BRING MY DOG?

Dogs are welcome but should be on a lead at all times.

CAN I BRING MY OWN FOOD?

Patrons are welcome to bring their own food and many do and enjoy picnics adjacent to the course.

IS THERE KID'S ENTERTAINMENT ON THE DAY?

At our point-to-point, we are lucky to have wide open spaces for children to play in a safe environment also, the West Waterford Hunt will be happy to introduce youngsters to the Hunt horses. The park in Lismore and the children?s playground will be open to the public on race day.

DO YOU HAVE AN ATM?

There are no ATM facilities at the course but there are ATM ?s at both the AIB and Bank of Ireland branches in Lismore and also at the supermarket between the banks , all a few minutes? walk from the course.

A day at Lismore point-to-point races is the ideal day out for all the family.

One of the real treats of racing at Lismore, is just close racegoers can get to all the action.